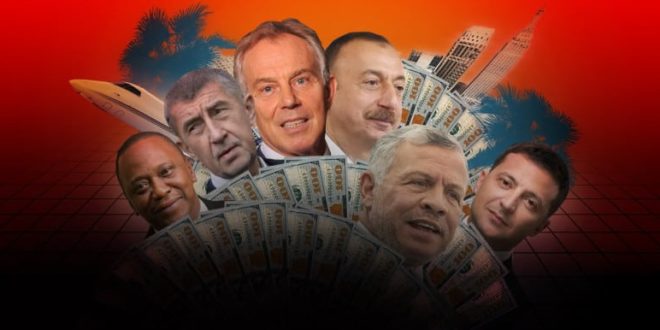 Known as the “Pandora Papers,” the collection includes 11.9 million files from companies hired by wealthy clients to create offshore structures in tax havens such as Panama, Dubai, Monaco, Switzerland, and the Cayman Islands.

The documents expose the financial secrets of 35 world leaders, including former and current presidents, prime ministers, and other heads of state. Among those targeted are 300 public officials – ministers, judges, mayors – from more than 90 countries. More than 100 billionaires also appear in these documents.

Many use such offshore companies to own luxury goods such as yachts or property.

According to The Guardian, the documents reveal a financial system hidden from the world’s eyes that allows the rich to hide their wealth or some of their fortunes and avoid as much as possible the full payment of taxes.

What do the documents contain?

The “Pandora Papers” are emails, memoirs, company start-up files, stock certificates, and complex schemes that show the structures of corporations.

In many cases, they reveal the actual owners of some companies.

The files were analyzed and released by the International Consortium of Investigative Journalists in Washington (ICIJ), which provided access to data with their colleagues from various prestigious publications such as The Guardian, Washington Post, BBC, or Le Monde.

But they’re not the first such leaks – “Offshore Leaks,” “Panama Papers,” and “Paradise Papers” have appeared on the same subject – but they are the ones with the highest volume of data.

One of the primary targets of the “Pandora Papers” revelations is Jordan’s leader, King Abdullah II, who allegedly amassed a fortune of $100 million from Malibu to Washington or London to buy 15 homes since he assumed power in 1999.

According to BBC, The King of Jordan refused to explain, simply saying that it is not unfair to own property through offshore companies. Lawyers for King Abdullah said he used his wealth to buy the homes, and there was nothing improper about him using offshore firms to do so.

Jordan receives substantial international aid, including from the US and UK. The UK government is one of the regime’s biggest financial backers, doubling its funding to £650m over five years in 2019.

Jordan is going through a difficult financial period, which has also generated street protests, and the king’s position is not exactly robust. On Sunday evening, at the time of the revelations, Jordan had blocked the ICIJ website, but details of the king’s fortune had already appeared in all the international press.

According to the leaks, the family of leader Ilham Aliyev bought and sold properties in the UK worth 400 million pounds (460 million euros).

One of the properties was sold to the royal real estate holding, which is now looking at how and why it paid £67 million to a company behind which the regime accused of corruption and human rights violations is located.

Andrej Babiš is accused of using an offshore company to purchase a nearly $22 million castle in the south of France. In a televised debate hosted by CNN, Babis denied any illegal activity. “The money went from a Czech bank, it was taxed, it was my money, and it went back to a Czech bank,”

According to Politico, after publication, he tweeted an apparent response to the reports: “I have never done anything illegal or wrong, but that does not prevent them from trying to denigrate me again and influence the Czech parliamentary elections.”

Andrej Babis, who is campaigning for the October 8-9 elections, said during the debate. Babis, the founder of the agricultural, food, chemical, and media empire Agrofert, entered politics in 2011 and created a new political party, ANO, to fight corruption.

According to the Guardian’s story on the investigation, the Cypriot law firm “denies any wrongdoing, while the Cypriot president says he ceased having an active role in its affairs after becoming leader of the opposition in 1997.”

The documents also target Ukraine’s President Volodymyr Zelenskyy, who was elected in 2019 on an anti-corruption platform.

According to the Pandora Papers documents, some of the president’s close associates have benefited from a network of offshore companies, including valuable properties in London. Zelensky and his partners in a television company began using the network years ago, at least since 2012.

According to Aljazeera, An adviser to Zelenskyy’s chief of staff said on Monday that the president had created the offshore companies to “protect” the group’s incomes against the “aggressive actions” of the “corrupt” government of the pro-Russian President Viktor Yanukovych.

Before being elected in 2019 based on an anti-corruption campaign, Zelensky transferred his shares from the private company to a business partner who became his primary presidential adviser. Subsequently, a deal was made whereby the company paid dividends to a firm owned by Zelensky’s wife. A spokesman for Ukraine’s president declined to comment on the allegations so far.

Another prominent holding of the “Pandora Papers” is Kenya’s president, Uhuru Kenyatta, who has proclaimed himself the “enemy of corruption.” He will have to explain why he and his family ended up owning more than $30 million through offshore companies.

Kenyatta did not answer questions and did not explain whether the property was declared to the authorities of her country.

Among those targeted by the revelations are former British Prime Minister Tony Blair and his wife, Cherie, who avoided paying £312,000 in real estate taxes. They bought a property in London partly owned by the family of a senior Bahraini minister, the Guardian reports.

The prime minister bought the £6.6 million property by acquiring the offshore company he owned in the Virgin Islands.

While the transaction is not illegal, and there is no evidence that the Blairs have made special efforts not to pay taxes, their strategy shows the existence of grey areas through which wealthy owners manage to avoid the financial obligations of other British citizens.

Prominent members of Pakistani Prime Minister Imran Khan’s government, donors to his party, and family members of the country’s powerful military generals have moved millions of dollars of wealth through offshore companies.

Khan, who rose to power in 2018 on the back of promises to arrest Pakistan’s “corrupt” political elites, was not personally named in the newly leaked documents. The ICIJ leak called five former high-ranking military officers, including a former air force chief and two lieutenant-generals in the army, linked to significant offshore investments in property and commercial enterprises.

TEN.info (The Educational Network) combines the pursuit of interesting and intriguing facts with the innate human desire to rank and list things. From its humble beginnings in 2006 up until now, TEN.info has served millions of hungry minds.
@tendotinfo
Previous 10 Lovely Flowers Which Bloom Only At Night
Next Top 10 Tips for Handling Stress When Teaching Abroad How has the pandemic affected the adult sector? Social media marketing seems to be the “in” thing these days, but there are some …