Pin
10 Most Multi-Talented People Of All Time

Everyone wishes to be multi-talented. There’s a term for these types of people: polymath. A polymath is a person who is knowledgeable in many areas (science, music, etc.). For some reason, there haven’t been too many women polymaths or Renaissance women recorded in history over the years.

There also have been few modern-day polymaths.

Check below our top ten of the most multi-talented people of all time.

There were few Renaissance women, but Hildegard von Bingen could be categorized as one of them. This German woman, who was “tithed” to the Church, mastered many different subjects, even early.

She experienced visions, which she wrote down and published. These led to the formation of Christian doctrine and salvation. In her writings, she also addressed vices. Popes sought her advice over the years. She also studied the science of the body and invented medical terminology, including sanguine and melancholy.

She was known as being a moderate in the time of extremes, something which truly sets her apart for her time.

Check the trailer of “The life of Hildegard von Bingen” movie.

The closest thing we have to a modern-day polymath or Renaissance man, Hofstadter, born in 1945, is a professor of cognitive science, author, philosopher, academic musician and artist, mathematician, and physicist. Hofstadter is most famous for Hofstadter’s Law: “It always takes longer than you expect, even when you take into account Hofstadter’s Law.”

Musician, theologian, physician, philosopher, peace activist, humanitarian. Schweitzer did and wrote about it all. In addition to winning the Nobel Prize in 1952 for his philosophy of “Reverence of Life,” Schweitzer also founded a hospital and campaigned against nuclear weapons.

He lived his life according to his ethics, contained within these two quotes: “A man is ethical only when life, as such, is sacred to him, that of plants and animals as that of his fellow-men, and when he devotes himself helpfully to all life that requires help,” and “A man is truly ethical only when he obeys the compulsion to help all life which he can assist, and shrinks from injuring anything that lives.”

The third President of the United States was arguably one of the most talented men ever to rule any country. In addition to politics and government, Jefferson’s interest was in architecture, inventions (such as the rotating book stand and improvements to the polygraph machine), books, wine, and birds.

A prolific writer as well, Jefferson learned to translate Gaelic. He knew that “a strong body makes the mind strong.”

Robeson was famous for his beautiful bass-baritone voice and his acting talents. However, in addition to those talents, Robeson was also a professional athlete, writer, multi-lingual orator, scholar, and lawyer.

As Robeson himself once commented, “Through the years, I have received my share of recognition for efforts in the fields of sports, the arts, the struggle for full citizenship for the Negro people, labor’s rights, and the fight for peace.” He is one of the pioneering African American polymaths of our time.

One of the most extraordinary polymaths of all time, Aristotle was a Greek philosopher who studied under the great Plato and taught Alexander the Great. His writings covered many subjects, including metaphysics, poetry, physics, logic, music, theatre, rhetoric, government, politics, biology, ethics, and zoology. He is credited with discoveries including the golden mean, reason, logic, and syllogism.

One of his most astute quotes is as follows: “All human actions have one or more of these seven causes: chance, nature, compulsions, habit, reason, passion, desire.”

Asimov, the author or editor of over 500 books and 9000 letters and postcards, is published in nine of the ten major categories in the Dewey Decimal System.

He was a writer who was a prolific polymath with excellent knowledge of a wide variety of subjects. Although he was multi-talented and could be classified as one of the most intelligent men of his time, he once noted that everyone should think highly of themselves: “And above all things, never think that you’re not good enough yourself. A man should never think that. I believe that in life, people will take you to your reckoning.”

That belief is the mark of a true genius.

Newton was the correct package when it comes to a Renaissance man. This English mathematician, physicist, theologian, astronomer, alchemist, and philosopher came up with the theories of gravity and laws of motion.

He is often more influential in the world of science than Albert Einstein. One of the pithiest statements ever made by Newton is this: “I can calculate the motion of heavenly bodies, but not the madness of people.” I can’t argue on that :).

It is considered one of the best artists of all time, but Da Vinci is also one of the most talented men ever walked the Earth.  He came up with the helicopter, tank, solar power, calculator, and a theory of plate tectonics and painting famous works like The Last Supper and the Mona Lisa.

The following quote by Da Vinci proves just what a genius he was: “Although nature commences with reason and ends in the experience, we must do the opposite, that is to commence with experience and from this to proceed to investigate the reason.” This quote is over most people’s heads drives home the intelligence that resided in Da Vinci.

Credited for being one of the Founding Fathers of the United States, Franklin was also an author, printer, politician, inventor, and scientist whose scientific contributions have influenced physics and electricity.

Franklin’s inventions include bifocals, the lightning rod, the Franklin stove, the glass harmonica, the odometer, and the first public lending library in the United States.

Some of Franklin’s more notable quotes include, “A house is not a home unless it contains food and fire for the mind as well as the body,” which he lived by.

TEN.info (The Educational Network) combines the pursuit of interesting and intriguing facts with the innate human desire to rank and list things. From its humble beginnings in 2006 up until now, TEN.info has served millions of hungry minds.
@tendotinfo
Previous Top 10 Reasons to Bring Your child to an Escape Room
Next Top 10 Non-Binary Celebrities 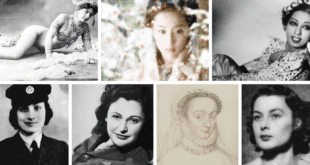